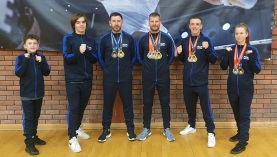 New youths and family classes added to our timetable.

IAKSA kickboxing opened its first classes in Scotland over 25 years ago growing to a variety of locations in the country. The first class in Edinburgh opened in 1993 in Portobello town hall under one of IAKSA's head instructers Craig Foster from then it has expanded and now has 2 clubs in Portobello and Easter road which now all train and fight as IAKSA Edinburgh Assassins. The success of the clubs is highlighted by the numerous Scottish,Brittish,European and World champions it has produced over the years.